So this year I am going to try something new. We are going to try pocket money. Fundamentally I have a issue with pocket money mainly because when I was a kid pocket money was 20cents these days it seems that going rate is $2 per job!!! I remember getting $2 for washing the car!!! I also fundamentally object to paying them for simply picking up after themselves.

In addition to this my other issue with pocket money is that I rarely carry cash these days so it is a major pain in the neck to have cash on me to pay the kids.

We have a list of jobs that they have to do and then optional jobs that IF all the must do jobs are done then they will get paid to do the optional jobs. This might seem mean but I am not going to pay them to be a member of our family.

I’m still not sure what I’m going to pay the kids for doing their jobs but I’m figuring that the likelihood is that I won’t have to cough up too much cash, given that they won’t do their “other” list and will try to do the “paid” list first. My plan is if their non optional jobs aren’t done then it doesn’t matter if they do the other jobs there is still no cash. If I have to remind them to do jobs then they don’t get paid either.

Their non optional jobs include: hanging their school clothes, putting away their school bags, keeping their room tidy, being nice to each other, having their equipment ready for their after school activities, making their beds, cleaning their teeth. Their paid jobs are cleaning the bathroom for my big boy and hanging the washing out for the girls.

In addition to this I think that I am going to try and implement the lost property bucket. This did the rounds of the internet a while back and I can really see the merits. Instead of getting angry that I am picking up their things I am going to ransom them back.

I was at a birthday party today for one of the girls friends and it would seem that in talking to other parents I have quite high expectations for our children when it comes to jobs. Apparently most kids don’t have jobs and they certainly aren’t expected to do things that my kids are. It would seem up place is almost a bootcamp!!!

We will see how this new system works it may be pie in the sky stuff but I have to try something right??? 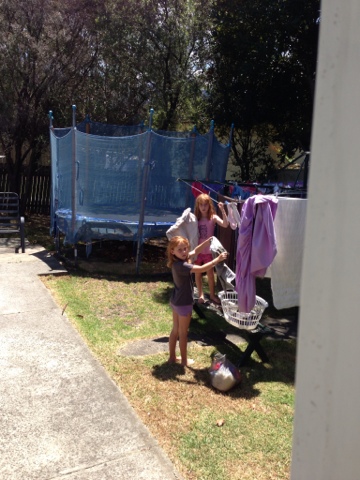