I love to bake, what do you love?

Some would say this really isn’t a problem they know that anytime I am asked I will definitely whip up some kind of decadent gooey dessert that is totally fat and sugar free (ok so it probably is neither of those things at all but it is guaranteed to be gooey and decadent!). Of course a couple of years ago when our big boy was diagnosed coeliac I thought my world was going to end, little did I know that all the diagnosis did was open up a whole new section of cookbooks for me to drool over!

As far as the coeliac diagnosis went to say that my first reaction was one of shock and disbelief and I even looked at the dr and said surely not surely it could be something else … You know less lifelong and less life impacting (I was thinking purely of how this was going to impact my life and my low affair with food to be totally honest!!) I look back now and realise how silly that reaction was, given I have such a love affair with food really I was probably best placed to deal with this challenge thrown at us.

In the just over two years since the diagnosis the variety of food available in the stores has grown exponentially, this largely I would think due to the fact that it is now fairly trendy to have some kind of dietary requirement and wheat intolerance is right up there at the top of most lists. But there are still so many things that you simply can’t buy so what is a girl with a love affair with food to do but experiment.

In the past couple of years I don’t think there isn’t a family favourite that I haven’t converted into gluten free. Of course there have been a few failures along the way like the strawberry shortcake that I made for my dad’s birthday last year it didn’t quite turn out, and I am sure there were more. But I would think that overall most of the conversions have been more than successful!

Last weekend I discovered a totally decadent banana roll with cream cheese filling, I was just waiting for an occasion to make it (mainly because as much as my man loves my cooking his expanding waist is testament to that) he just doesn’t need me to make cakes for him! When we invited to a friend’s house for a post Australia Day BBQ I knew I had the perfect place to try out my new find.

Of course as with lots of recipes this one was found on the web made by a lady in the states and wasn’t gluten free so was going to need some modification. First substitute was the flour typically is use a gluten free premix bought from the supermarket mainly because I am not sure if mixing my own flours would be cheaper though this will be something I will investigate this year. Then partly because I couldn’t find my baking soda and partly because I didn’t read the recipe properly prior to making it I used SR flour instead of plain plus baking soda and baking powder. 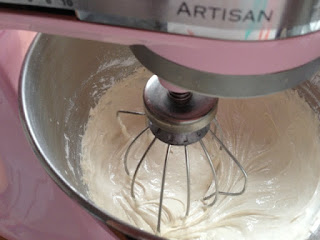 Often times I find that making a sponge can be daunting and overwhelming but since Christmas I have made three chocolate sponge rolls and now this so I have decided its all in the attitude if I have the attitude it will fail then well it quite possibly will. Making a sponge that also had fruit in it was certainly a new experience but it worked and cooked perfectly.

The next step was a little tricky and is probably the most overwhelming part of making a sponge roll and that is the rolling. The trick that I read in this recipe is to roll while still partially warm and cool it rolled this will help the roll to stay rolled. 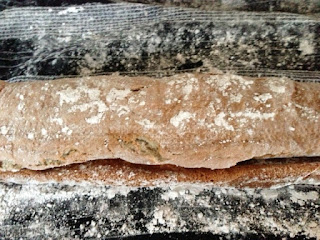 The last step and this is the bit that made the already very yummy banana sponge simply irresistible and also some more modification from me to the source recipe. The source recipe called for whipped topping something I had not heard of and upon researching decided I would do without and substitute with pure cream instead! The filling compromised of cream cheese and brown sugar whipped until the sugar was dissolved then I added the pure cream and whipped until it was thick then came the fiddle part unrolling spreading the filling and re-rolling.

I am pretty sure I put too much cream in but there were absolutely no complaints. Just before serving I drizzled some caramel topping over the roll as she had in the picture. When I brought it out for dessert there was no complaints about any of the modifications in fact I would argue that probably no-one even knew they had happened. 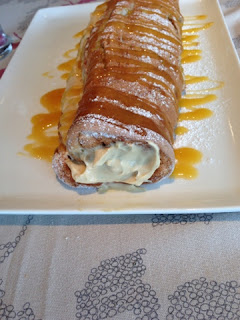 I get a real sense of pride when people eat my baking and say nothing because they are too busy eating. Sure I probably do like to do it for the compliments because I think in life we all do things that we know we are good at but in honesty I don’t mind if I don’t get compliments I really do cook simply because I love it. I’m pretty sure this is an inherited gene my mum and both grandmothers are/were great in the kitchen and I hope that I will pass this love onto our kids.

What is something you love to do or are really good at that you hope to pass onto your children?