Where is our moral compass?

I am honestly struggling today with the news.  Yes this is going to get political and it may even be uncomfortable for some people.  I am not going to apologise for that, I am incredibly uncomfortable about the entire situation and it is not lost on me that I have the ability to sit in the comfort of my lounge room and write this up.

The two major stories that I have been following and interacting on twitter about are Sydney lockout laws and Baby Asha who is still currently at the Lady Cilento hospital in Brisbane.

I have read some horrendous tweets today that I am truly in shock that people could say about other people.  Most of us in Australia live in a situation of relative wealth and privilege.  Yes, even those members of our society that rely on public housing and welfare are doing better than at least 50% of the World’s population.  Perhaps not great by Australian standards but by global standards most certainly!

“LOOK in YOUR OWN BACKYARD FIRST. HOW DISGRACEFUL. MILLIONS OF DOLLARS BUT YOU ALL CUT AUSTRALIANS DOWN and DOWN and DOWN and OUR OWN ELECTED GOVTS CANT SEEM TO WORK FOR THE PEOPLE WHO PAY THEM! GET OUT ALL OF YOU” – on the Q & A Facebook page.

To this “If #LadyCilento #LetThemStay protesters get their way, they’ll be throwing burning babies off boats to get into Australia.” on twitter from Bernard Gaynor Australian Liberty Alliance Senate Candidate for QLD! That’s right this man hopes to sit in parliament!

Without doubt if I look hard enough there is a lot of support for Baby Asha and her family actually it isn’t too hard when Brian Owler the current AMA President is speaking out with comments like these “The prolonged detention of children is a state sanctioned form of child abuse and we call for it to stop #healthasylum“ or this from Saturday night “Any attempt to forcibly remove baby asha #LadyCilento a dangerous act from which there is no return @TurnbullMalcolm #LetThemStay #auspol“.

Late this afternoon (Sunday) there appeared to have been a “deal” done whereby Baby Asha and her family will be allowed to move into community detention.  For how long it is uncertain.  The family is still not able to access their advocates or legal team so I am somewhat cynical about the humanity of this “deal” and fear they will be whisked away in the dead of night when the “noise” dies down, at least I feel that is what the Mr Dutton is hoping, I pray I am wrong!

Of course there are lots of just ordinary people speaking out on Twitter and protesting outside of the hospital itself and supporting those who were protesting overnight by supplying them with water, food etc as they kept vigil.  It all just feels so empty to me.  We are all up in arms about the 200+ asylum seekers that are currently here awaiting imminent deportation after the loss of the High Court Case regarding the legalities of offshore detention that was somehow found to be legal.  #LetThemStay has been trending for a little while now and has a fair following.

The thing that I find hardest of all to put together in my head is that Australia is a signatory to the Human Rights Convention, a signatory to the Refugee Convention and we as a country have also been engaged in conflicts in many of the areas that these Asylum Seekers are fleeing from.  I believe that we as a nation have a moral obligation to assist these people.  By no means am I suggesting that we throw open our borders, but honestly what is the worst that can happen for that.  Upon arrival people will still require processing.  At that point if they are not suitable or do not meet the refugee test then put them into detention until a suitable homeland can be found for them.

I also struggle that these people fleeing horrors that we cannot imagine and cannot simply return home because in many cases their homes simply do not exist anymore.

Images from the home we want Syrians to return to!

They are then “housed” in accomodation that we do not even expect some of the worst of the worst prisoners to live in!
“Former detainee says that detention doesn’t feel like prison, because in prison he still felt like a human being. #healthasylum #LetThemStay“– NSW Medical Students Twitter.

In addition to this we as a nation deny them appropriate healthcare, mental health care, education the list goes on.

These two pictures defy logic they almost make Nauru look like a tropical holiday destination when the reality is very different.

This however, has not occurred overnight, slowly but surely through a long campaign of fear from the conservative right since 2001 has ensured that as a nation we live in fear of anyone who looks different, believes something different, wears different clothing or speaks a different language.  We do not stop and listen to their stories to discover how enriching they could be to the society, they are pigeonholed as illegal and terrorists.  Bit by bit successive governments have enacted tougher and tougher legislations against refugees and illegal migration.  We as a nation have allowed this to occur because we continue to vote in conservative governments.  Of course we conveniently forget that the largest group of illegal migrants in Australia today are visa overstayers see the table below for the 2013 figures. 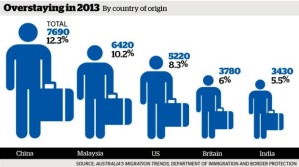 As almost a ridiculous sideshow Sydneysiders today took to the streets to protest lockout laws predominantly in the Kings Cross/Darlinghurst vicinities.  Really, you are kidding right that the biggest issue facing you today is that you can’t get a beer or two after 1am!  I am not unsympathetic to the plight of those who work in industries such as theatres etc and finish late but really if you want a drink that badly you can go down to the casino and get one.  Just because you are in the casino does not mean that you MUST gamble.


Closing bars and clubs at 3am with lockouts from 1am does not mean we are turning into a Casino culture there are a whole raft of other factors contributing to that!  Equally the lockout laws do not equate to killing off the music scene as was claimed by some interviewed for news stories today.

We have the medical profession clearly saying that these laws are actually making a huge difference in the incidents of violent injuries presenting in the ER departments of the major city hospitals.  If these laws prevent just one death or long term injury then surely that is a good thing?

Now I am not a wowser by any stretch of the imagination, and I am not going to say things were better in the olden days.  Seriously, I did my fair share of drinking in the Cross and I don’t remember the alcohol fuelled violence we have today.  The only late openers in the Cross back in the day were the strip joints (which I didn’t frequent!) and the Bourbon and Beefsteak, given we would often need to train it back to the ‘burbs we would try to make the last train of the night otherwise it was a long wait at the Bourbon and Beefsteak til we could get home!

I also had a large group of male cousins and friends and honestly they drank A LOT and there just wasn’t the violence for violence sake there seems to be today.  I am not saying there weren’t fights there were but there was typically a reason (never justifiable in my opinion) but I just don’t remember blokes walking up to other blokes (or girls on girls) and hitting someone for no reason.  Things were getting out of hand, alcohol violence was increasing at alarming rates and something had to be done.

Hence the lockout laws.  Sure they are not popular and certainly there was always going to be casualties in these laws, from the many arguments I have heard today all of them revolve around the ability to buy alcohol after a certain time.  It is like Sydneysiders are being denied their Human Right to drink alcohol!  Really?!

Here’s a thought if you as business owners are really serious about staying open late and providing opportunities for musicians to play or places for people to hang out, think outside of the square.  Diversify your business accept that as a nation we have a HUGE problem with alcohol so perhaps it is time to address that and provide alternatives.  After a certain time offer other forms of drinks mocktails, non-alcoholic beverages, hot drinks, food.  If it is really about the venue being able to stay open late and listen to music then this will work.  Though I suspect it actually has a lot more to do with the fact that people don’t like that they can’t buy drinks and they don’t like being told what to do even if it is having a beneficial effect for the community at large.

I guess I am just in shock at the sense of entitlement that some Australians have.  We will defend our right to buy a beer after 1am but we won’t defend the right of someone seeking safety and sanctuary.  It just all makes me sad.